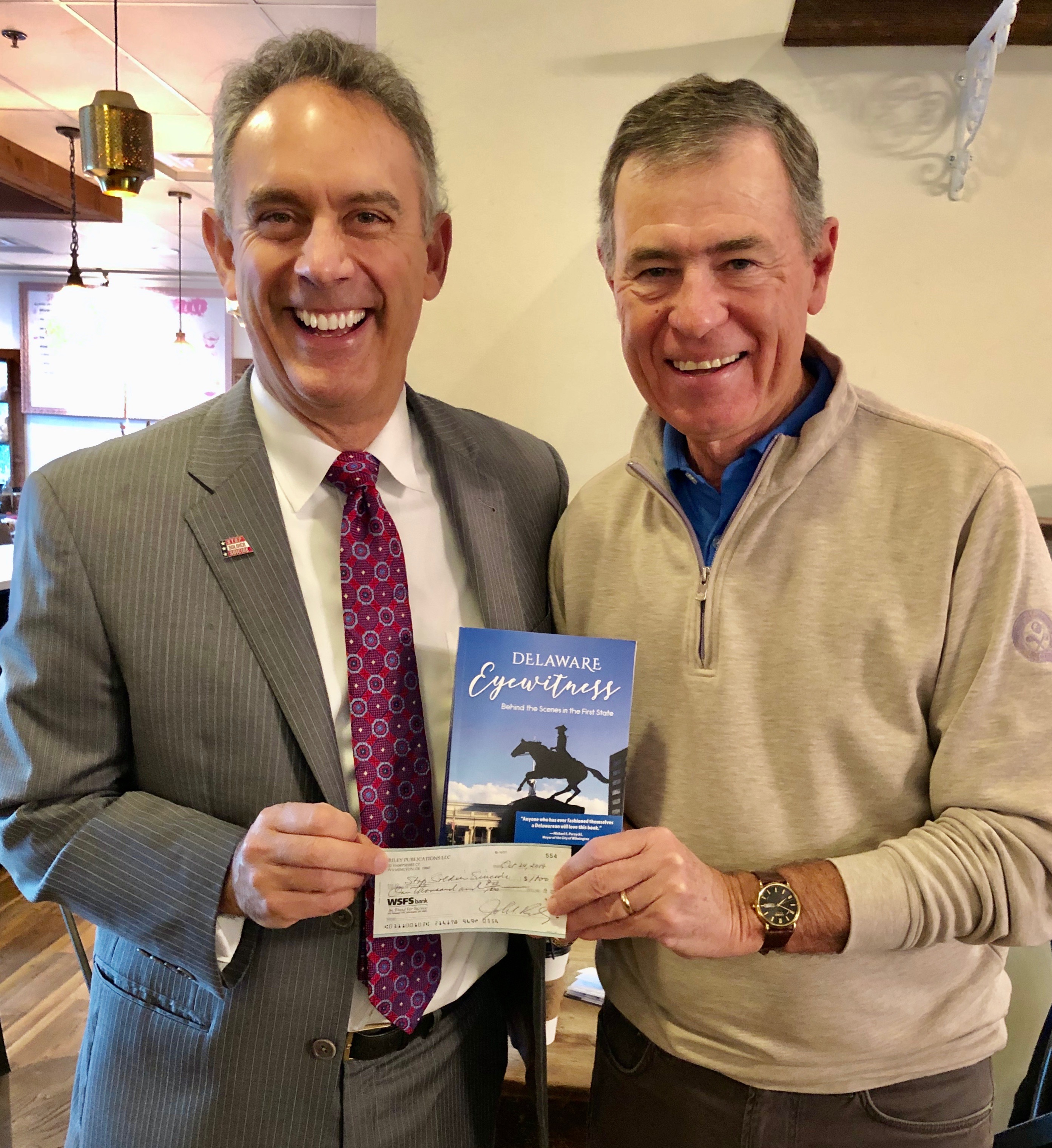 Today, October 24, 2019, John Riley, author of Delaware Eyewitness: Behind the Scenes in the First State presented a check for $1000 to support the vital work of “Stop Soldier Suicide.” Representing $10 in proceeds from his first 100 books sold, the check was gratefully accepted by the organization’s Delaware chairman, Brian DiSabatino.

“I want to congratulate John on the successful launch of his book and thank him for remembering our veterans. An Army veteran himself, John dedicated this fascinating Delaware story to Vietnam veterans and Delaware POWs.”

Part memoir and part Delaware contemporary history, Delaware Eyewitness features a behind the scenes look at more than six decades of the people, places and events in and around the First State. The book includes inside stories involving governors, athletes, coaches, and the leaders of some of Delaware's most prominent companies. Notably, Riley provides a detailed account of the unraveling of one of Delaware’s most iconic corporations, Hercules, ravaged by debt, bad business decisions and under assault by an infamous corporate raider.

Riley said, “With over 400 names, many prominent and influential, readers may first be drawn to the index to see what was said about people that they know.”

The connection to Stop Soldier Suicide is an outgrowth of the efforts begun in 2015 by Brian DiSabatino’s son Jacob. After learning of the epidemic of suicide by veterans and members of the military, Jacob, then a student at St. Mark’s High School, founded “22in22” to raise awareness of the suicide crisis impacting our military. Funds raised by 22in22 help fund Stop Soldier Suicide, a non-profit that has attracted the support of actor Gary Sinese and musician Charlie Daniels. 22in22 has also inspired the development of Delaware Vet Fest, which just enjoyed its fourth year with over 2000 in attendance.

To learn more about Delaware Eyewitness or to order the book go to: https://www.delawareeyewitness.com/

To learn more about Stop Soldier Suicide go to their website at https://stopsoldiersuicide.org/.