Delaware Eyewitness - Q&A with the Author 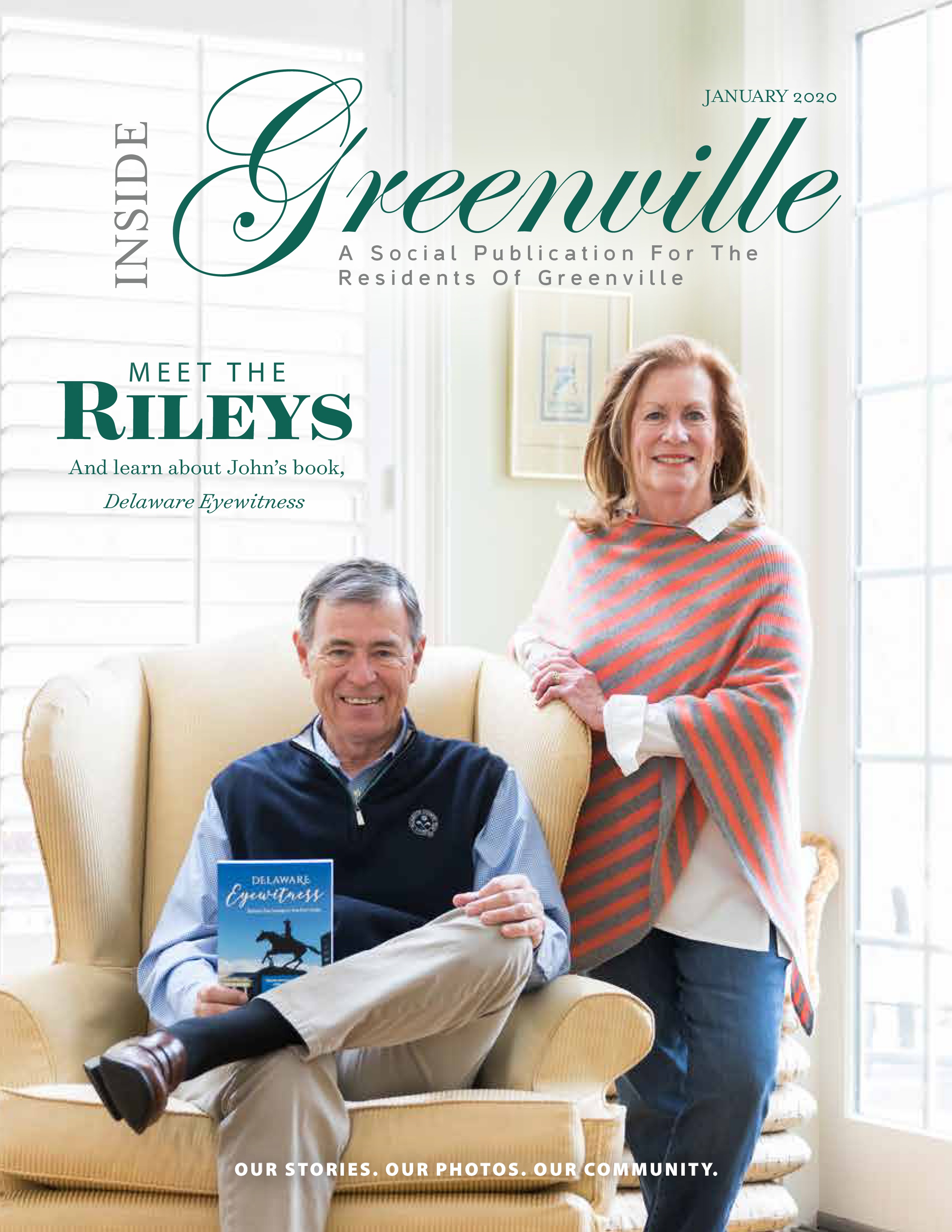 This article originally appeared in Inside Greenville, January 2020. Used with permission.

You've probably read author John Riley's articles on the Town Square Delaware site. According to Michael Fleming, fellow Stonewold resident and owner of Town Square Delaware, "these stories were just a small appetizer to the entrée served up in this enjoyable, bustling book...a gift to all of us who love history, humor and Delaware."

Is this another book about Delaware politics?

Very little of the book is centered in Dover. I do cover some campaigns, including my own for Congress and New Castle County Council and a couple I worked on with campaign consultant Mike Harkins. My years in Dover were focused externally on the busIness community which brought me into contact with DuPont, MBNA and others, so the Delaware corporate scene is a larger focus.

You mention over 400 local names, including past Inside Greenville featured neighbor Tom Evans - will everyone like what they read about themselves?

I'm sure not everyone will be completely happy with what I have to say. A couple politicians and various CEOs of Hercules might not appreciate the moments I selected to tell about, but on balance I believe they will see it as fair and accurate. I'm in the role of a storyteller, explaining what happened behind the scenes - its history.

You share a lot of your own history as well, such as telling about growing up on Wilmington's east side in a small home with eight siblings and a troubled father. Why did you decide to include such personal stories?

I struggled with whether to bring this into the story but eventually decided it was integral to my own story. Many had it tougher than we did. My father always had a job and during our early childhood years, except for the strict discipline and flashes of temper, we had our good times. Unfortunately, over time things deteriorated. While working second jobs, mostly as a driver, he was prescribed amphetamines. These drugs would basically destroy his life and bring much chaos to our home. I hope that through sharing this experience, it may help someone else as they struggle to understand addiction and the toll it takes. We were blessed to have an incredibly strong and caring mother who somehow held things together.

The downfall of Hercules is a major component of the book. How did you come to be so close to the action?

As the pressure mounted on the company, primarily due to the significant debt load, people began to lose their jobs. I had recently joined the company to lead government relations, but when the losses mounted I ended up filling a vacuum—one that included corporate communications and media relations. This quickly put me close to a series of CEO's and in the middle of the proxy war when corporate raider Sam Heyman began his run at the company. I had always wanted to tell the Hercules story and had thought about devoting an entire book to the subject. Hopefully, I have captured most of the key elements of the story in a more condensed fashion. It was a wild ride!

You dedicate the book to all Vietnam veterans and three POWs in particular. How did you come to know them?

I never knew James J. Connell; he graduated from Salesianum before I started there. I came to know of his story through the efforts of a former Naval fighter pilot from my class of 1964, Bill Coll who nominated Connell to the school's hall of fame. This led to writing about Connell's heroism and coming to know his family. I met Air Force Brigadier General Jon Reynolds soon after he moved to Delaware in the '90s. Jon, who was held under harsh conditions for over seven years in various North Vietnamese prisons allowed me to interview him for TSD years ago. We have a mutual interest in military history (Jon taught at the Air Force Academy) and our families grew close over the years. Jon introduced me to Colonel Murphy Neal Jones, who was held captive for six and a half years. People still talk about the speech Jones gave at the Veterans Day service at the Delaware Memorial Bridge in 2018. Neal died shortly after and was buried with full military honors at Arlington.

To read John's book, which has been called "informative, interesting and engaging" and must-read for all Delawareans," order a copy through delawareeyewitness.com or pick one up at Hockessin Bookshelf.