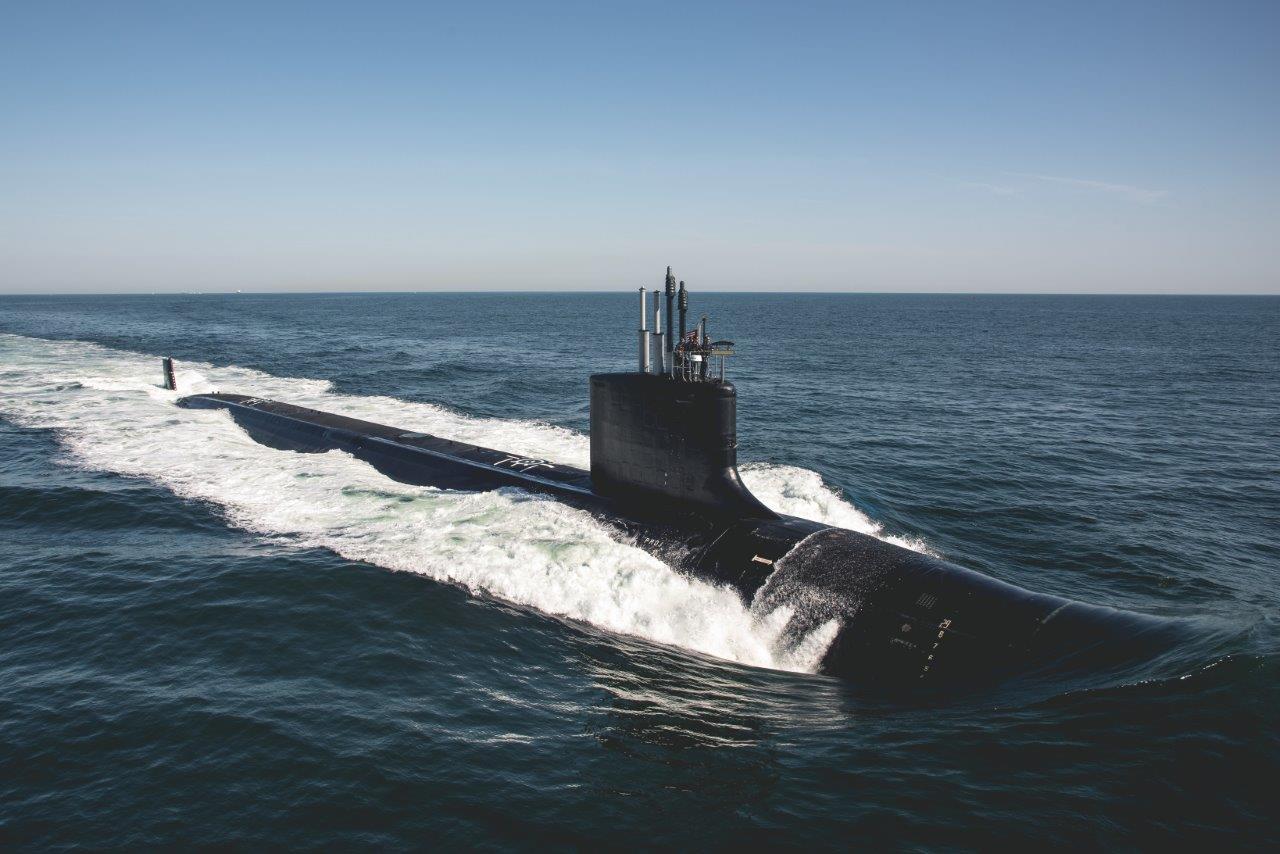 Today, Saturday, April 4, 2020 was to be the day thousands of Delawareans gathered for a ceremony to celebrate the first ship, or in this case submarine, to bear the name USS Delaware in a hundred years.

Unfortunately, as with so many long-planned events, the commissioning of this great nuclear attack submarine has been postponed due to the coronavirus pandemic. While the Navy, Navy League and state of Delaware consider options for bringing the submarine back to the Port of Wilmington, the USS Delaware will be moving forward to fulfill its mission. In recognition of this important day, we are sharing an article by TSD contributor John Riley written for the official USS Delaware program book. John’s piece beautifully recounts the many unique connections of Delawareans and First State institutions to the United States Navy.

Today we commission another great Navy vessel bearing the name “USS Delaware.” This presents a special opportunity to reflect on the significant American Naval leaders with connections to the “First State.” Some of these connections such as those to Admiral William “Bull” Halsey and Admiral Husband Kimmel of WWII fame run deep, while other connections such as to Admirals McCain and Rickover fall more into the line of duty. But it is equally important to recognize that there have been thousands of sailors from Delaware who have served our country with commitment and valor in the past, and many who continue to do so today. On this day we honor and thank them all.

On September 7, 2018, I attended the “Change of Command” ceremony of the U. S. Navy SEALs at the Naval Special Warfare Center in Coronado, California. Rear Admiral Timothy Szymanski of Wilmington, Delaware handed over command of the Navy SEALs to Rear Admiral Collin Green, whose family roots could also be found in Wilmington—like Szymanski, Green’s father graduated from Salesianum School. Szymanski was soon promoted to Vice Admiral and assumed the position of deputy commander of all U.S. Special Operations.

Admirals Szymanski and Green are not the only Wilmington and U.S. Navy connections to the San Diego Bay area. During the Mexican-American War in 1846, Samuel Francis Du Pont, in command of the USS Cyane, led our naval forces during the capture of San Diego. Du Pont would eventually serve as a rear admiral during the Civil War. According to Hagley Museum historian Lucas Clawson, Du Pont is credited with being one of the organizers of the Naval Academy in 1845 and he served two short appointments as superintendent. Du Pont died in June 1865, only months after the surrender of Confederate forces and was buried in the family cemetery near Wilmington. DuPont Circle in Washington DC is named in his honor and his statue stands at the entrance to Rockford Park.

There are few names that resonate through WWII history with greater significance and respect than the names William “Bull” Halsey, commander of the South Pacific Fleet and Admiral Raymond A. Spruance, the hero of the Battle of Midway, considered the turning point of war with Japan. Admiral Halsey is the last Naval officer to achieve Fleet Admiral, or five–star rank. 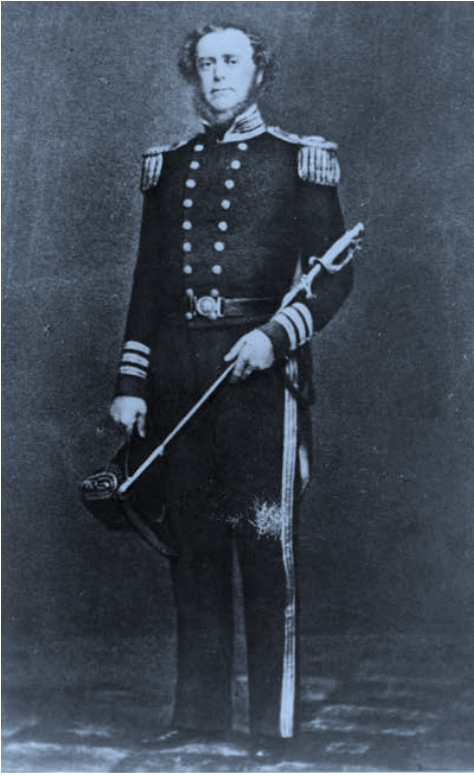 Descendants of Admiral Husband Kimmel also call Delaware home. Four-star Admiral Kimmel was Commander-in-chief of the Pacific fleet on December 7, 1941, the “day that will live in infamy.” Kimmel had a distinguished career leading up to Pearl Harbor but was blamed for the lack of readiness of the fleet. Although it was later discovered that information that would have been vital to the defense of Pearl Harbor was not transmitted to Kimmel, he was subsequently reduced in rank by the Navy to two-star Admiral and retired from the service.

Admiral Kimmel’s son Ned came to Delaware as a DuPont lawyer. He was a Navy veteran of WWII and worked tirelessly until he died to restore his father’s full rank and reputation. His brother Manning, a Navy submarine commander in WWII was killed in action in the Philippines. In their book A Matter of Honor: Pearl Harbor: Betrayal, Blame, and a Family’s Quest for Justice, authors Anthony Summers and Robbyn Swan make a powerful case on behalf of Kimmel. Two WWII naval leaders who came to the defense of Kimmel were “Bull” Halsey and Ray Spruance.

Any mention of Pearl Harbor would not be complete without including a comment about the heroics of Delawarean, George Welch of Wilmington. Welch was one of the few pilots to get airborne on that fateful day and was credited with knocking four Japanese planes out of the sky. He was nominated for the Medal of Honor and awarded the Distinguished Service Cross. Welch went back to the Pacific after aiding in War Bond drives and was credited with many more aerial victories. He would ultimately lose his life serving as a test pilot in 1954. Today his portrait hangs in Legislative Hall in Dover.

In one of the most famous scenes of WWII, Lt. Commander William Kitchell, husband of Irene du Pont Carpenter is seen escorting General Douglas McArthur and Admiral Chester Nimitz to their positions on the deck of the Battleship Missouri to sign the surrender by the Japanese. Kitchell was a trusted aide to Admiral Halsey during the war. Many of his descendants still live in Delaware, including prominent lawyer Laird Stabler III. 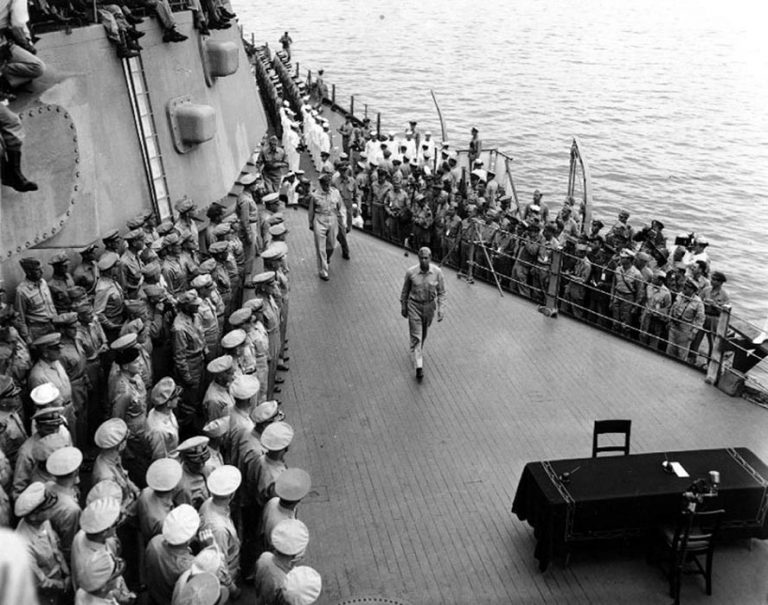 As we know, the Japanese surrendered after the second atomic bomb was dropped on the country. In addition to being a supplier of various munitions for the Navy, the DuPont company was one of the major contractors on the Manhattan Project, the extraordinary program that built the bomb. Crawford Greenwalt, who would one day lead the DuPont Company, worked on the project and was present in Chicago during the first artificial self-sustaining nuclear reaction. One of the engineers at the highly secretive Manhattan Project development site in Los Alamos, New Mexico was Gene DiSabatino, future president of the major Delaware contracting firm bearing the DiSabatino name. In an oral history for the National WWII Museum DiSabatino explained how he traveled to Tinian Island in the Pacific to assist with the loading of the bomb that would be dropped on Nagasaki, Japan.

I became familiar with the past connections of Hercules Incorporated to the Navy while managing public affairs for the company in the early 2000’s. Hercules was a major contractor to the Navy in both world wars. In the book, Labors of a Modern Hercules by Davis Dyer and David Sicilia published in 1990, the authors describe the involvement of Hercules researchers in some of the weapons technology of WWII. One of the most important developments in which Hercules played a part, was in the development of the radio proximity fuze (VT) which detonated at a specific distance from a target. In describing the impact of the innovation, the authors state, “Indeed, at the end of the war, the U. S. Navy rated the radio proximity fuze second only to the atomic bomb as a critical Allied technological advantage.” During the later development of ballistic missile systems for nuclear submarines, Hercules supplied the second-stage rocket motors for the submarine launched Polaris missiles, and later for the Poseidon missiles.

With the splitting of the atom came other uses for atomic energy both in peaceful and military applications. One military application was the development of reactors for nuclear propulsion in submarines and other Naval vessels such as aircraft carriers. While in Navy ROTC at Tufts University, Jack Krol, a future Chairman & CEO of DuPont was ordered to Washington to interview with Admiral Hyman Rickover, “The Father of the Nuclear Navy.” Rickover was famous for his demanding personality, work ethic and challenging interviews. As he was closing out his questions that day he asked Krol if he planned to marry. When Krol responded that he did plan to marry, Rickover responded, “Then you can’t come here—married people don’t have time.” To his surprise Krol got a call to join Rickover’s nuclear team, where he spent his Navy years.

Delaware U.S. Navy connections continued into the Vietnam War. On November 11, 2018, Governor John Carney honored posthumously the service of Lt. Commander James J. Connell of Wilmington with the “Order of the First State.” For his heroic service as a Navy fighter pilot and POW, Connell had been awarded the Navy Cross nearly 50 years ago, but his heroism had only recently come to light in his home state. Connell is believed to have received the highest award for valor of any Delawarean who served during the Vietnam War. 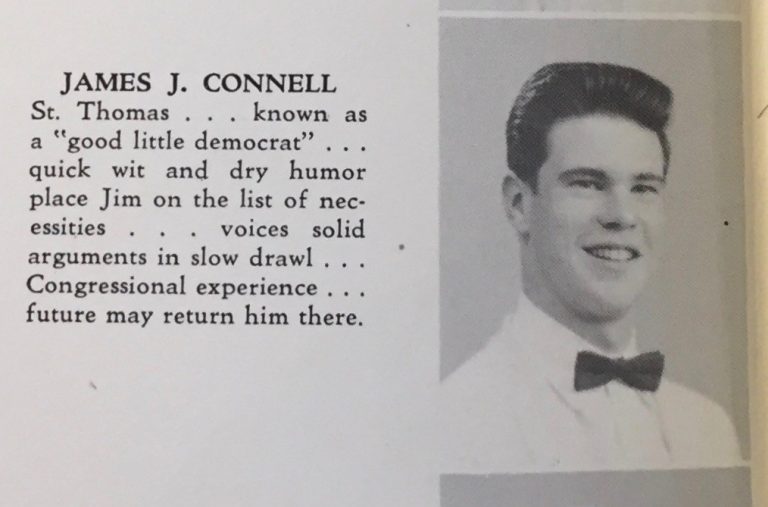 JJ Connell graduated from Salesianum in 1957

During the Vietnam years and after, future governor and U.S. Senator Tom Carper served as a Naval flight officer and P-3 aircraft mission commander tracking Russian submarines. He retired after twenty-three years of Navy service with the rank of Captain and following the death of John McCain, became the last Vietnam veteran serving in the Senate. After decades of chasing Russian subs, Senator Carper has led the charge to bring a U. S. submarine bearing the Delaware name to the Port of Wilmington.

Another governor in the recent history of the state who served in the Navy was Pete du Pont. Governor du Pont was commissioned through Naval ROTC. In the late 1950’s, Lt. du Pont spent three years on duty with the U. S. Naval Construction Battalions, better known as the Navy Seabees.

Philip Reese of Wilmington, who has served in numerous community leadership roles, including Chairman of the State Board of Pension Trustees was a trusted aide responsible for command and control communications to Admiral John McCain, Commander, United States Pacific Command (CINCPAC) during the later years of the Vietnam War. McCain was the first four-star officer to be the son of a four-star officer and he was also the father of the famous senator, presidential candidate and POW, John McCain III. Both McCains spent time in Delaware, John III campaigned here for president and on behalf of Congressman Mike Castle. His father addressed a joint session of the state legislature on June 9, 1971 at the invitation of Governor Russell Peterson. During McCain’s long captivity in Vietnam, Phil Reese said the senator’s father rarely discussed his son’s situation even to his closest associates.

It is clearly evident that Delaware has had a proud connection to Naval history from the first USS Delaware in the Revolutionary War to the nuclear attack submarine that bears that name today. No doubt there are many more connections and stories about those who served and those who made the ultimate sacrifice that have not made it into this short essay. As Delawareans, those heroes can all take pride in the great warship that is here today—one that will travel the seas for decades to come bearing the name, USS Delaware